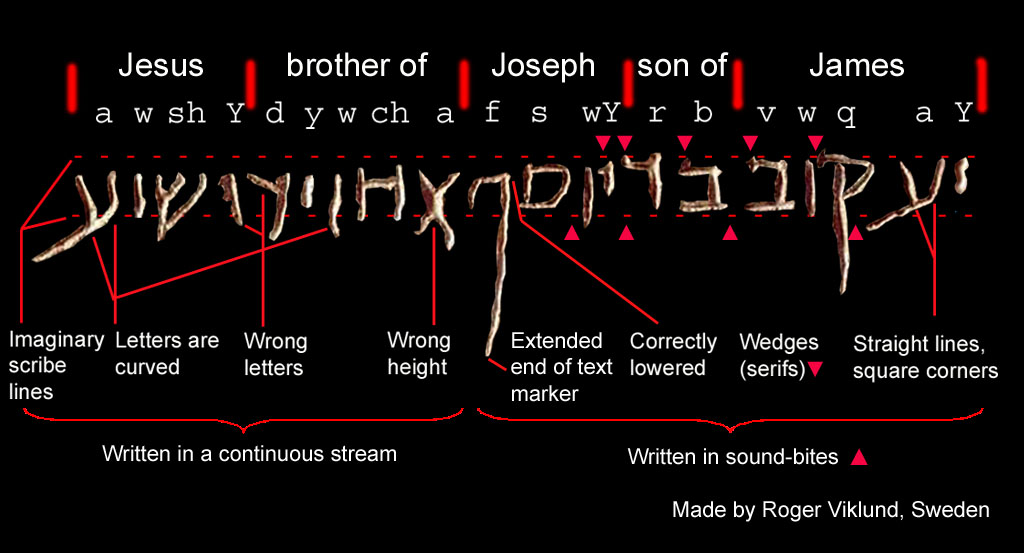 WHAT ARE THE DIFFERENCES BETWEEN THE TWO SCRIPTS?

1)    The first part is correctly spelled. The second part is not correctly spelled. Depending on how you chose to interpret certain letters of the second part, they are either incorrectly done or the sentence is misspelled.  Two letters – d (dalet) in “brother of” and Y in “Jesus” – are done incorrectly. And even if you presuppose that the letters should be d and Y, the sentence is grammatically wrong.

2)   To be able to write in a straight line, one or two scribe lines were often drawn, on the top and the bottom respectively. The first part follows a straight line (apart from the last letters, which correctly drops). If these imaginary scribe lines are extended, the letters of the second part are below the lines.

7)    Not only is the first correctly written, but it is also correctly stressed. The final pe [in Joseph] drops because the voice drops at the end when the words are spoken.” Rochelle Altman, http://groups.yahoo.com/group/JesusMysteries/message/10439

8)   This final pe is also extended. This is a “end of text”-marker, and it shows that the original inscription said "James, son of Joseph”.

when it should have been done something like this: yaqwvbrywsfachwydyshwa

“The script of the second part is a conglomeration of unrelated graphs from across the centuries and not a coherent script design. This peculiar diversity suggests that the writer chose graphs from examples on other ossuaries and documents stored in a cave or dug out tomb.” Rochelle Altman, Final Report on the James Ossuary, http://ccat.sas.upenn.edu/ioudaios/articles/finalreport.html

“The wedges also indicate that Jacob ben Josef lived and died during the age of Herod.” Rochelle Altman, Final Report on the James Ossuary, http://ccat.sas.upenn.edu/ioudaios/articles/finalreport.html